Disinformation campaigns with ties to Russia are continuing in an attempt to impede other governments' responses to the COVID-19 outbreak, complicating public health efforts to combat the disease, European officials warn.

"These messages are characteristic of the Kremlin's well-established strategy of using disinformation to amplify divisions, sow distrust and chaos, and exacerbate crisis situations and issues of public concern," the EU's European External Action Service warns in a new report.

As of midday Monday, COVID-19 had infected more than 351,000 individuals and had led to over 15,00 deaths worldwide, according to a Johns Hopkins University research team.

In Europe, monitoring propaganda that originates outside of the EU is the job of EEAS, which has been seeing a sharp increase in COVID-19 "disinformation, misleading information, outright lies and wrong things," Peter Stano, the European Commission's chief spokesman on foreign and security policy, said last week.

"When we are speaking about disinformation or false information circulating about coronavirus or COVID-19, we are always stressing that the source is either in Russia or can be tracked down to an outlet which is obviously and has been exposed in the past as pro-Kremlin," he added.

According to the EEAS, these campaigns are not simply peddling misinformation, but also disinformation.

"While misinformation involves the unintentional spread of false information, disinformation campaigns entail the intentional production and/or dissemination of verifiably false content, spread either for political or financial reasons," it says.

In the case of COVID-19, the Kremlin-aligned messaging focuses most on promulgating the lie that SARS-CoV-2, the virus that causes COVID-19, was manmade, EEAS says. The specific messaging, however, gets tailored to two distinct audiences. Messages being pitched to a domestic Russian audience "describe the virus as a form of foreign aggression," the report notes.

But messaging aimed at international audiences - delivered in Arabic, English, French, Italian and Spanish, among other languages - focuses "primarily on conspiracy theories about 'global elites' deliberately weaponizing or exploiting the virus for their own ends," EEAS says. The unit notes that its propaganda-tracking efforts are coordinated with partners, including NATO as well as the G-7 group of leading industrial nations - Britain, Canada, France, Germany, Italy, Japan and the U.S. 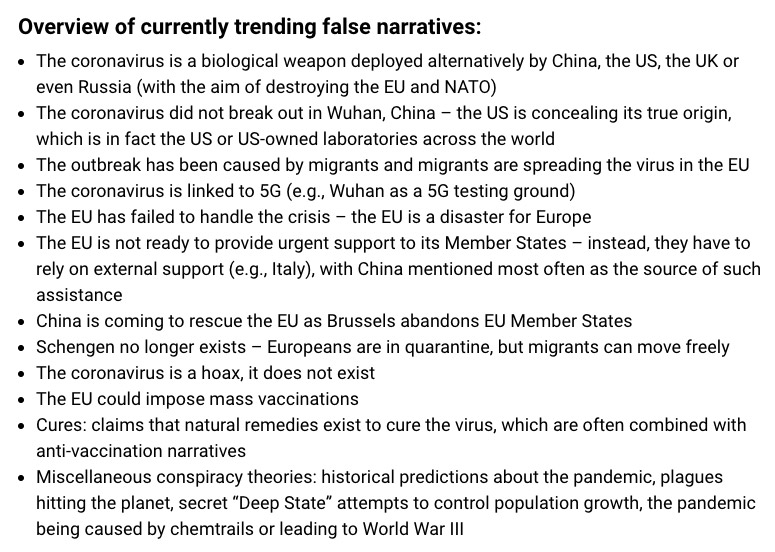 The EEAS reports that RT Spanish - the Spanish-language channel of RT, formerly known as Russia Today, which is funded by Moscow - is the 12th most popular source of coronavirus information online. It's frequently disseminated via posts and shares to Twitter, Facebook, Reddit and other media (see: The US Presidential Election Hacker Who Wasn't).

Moscow has dismissed the allegations. "If there was even a single concrete example, I could comment on it, but once again they are just unfounded accusations," said a spokesman for Russian President Vladimir Putin, the Guardian reported.

The EU warnings follow the U.S. State Department's Global Engagement Center releasing a report in which it noted that "several thousand online accounts - many of which have been previously tied to spreading Russia-friendly messages about the war in Syria or the so-called 'yellow vest' protests in France - are posting 'almost near identical' messages about the COVID-19 crisis," Radio Free Europe/Radio Liberty reported last month. The report says these accounts are posted in several languages - including English, German, French, Italian and Spanish - and trace back to Russian proxies.

Many private-sector nation-state watchers also see signs that pro-Kremlin outlets - both state-owned and private and across media outlets as well a social media channels - are seeking to amplify and distort the COVID-19 outbreak to further Moscow's geopolitical aims.

"Misinformation and psychological media operations related to the coronavirus pandemic are being conducted all over the world right now," Charity Wright, a cyber threat intelligence adviser at IntSights, tells Information Security Media Group.

"Historically, Russia has taken advantage of crises like this to amplify hoaxes and lies that are being told. This time, they are amplifying messages about COVID-19 being a state-sponsored biological weapon, being spread by U.S. soldiers in Eastern Europe, and false information to instill fear and panic among the global population," she says. "Currently, the observed patterns are similar to past Russia state-sponsored disinformation campaigns: sharing existing lies and deception in order to avoid attribution and taking blame."

One Washington think tank, for example, says the Kremlin likely started rumors in Ukraine that evacuees being transported back to the country from the Wuhan region of China, where the outbreak began, were suffering from COVID-19. The rumors led to protests last month in five Ukrainian towns. "The campaign's tactics, timing and nature all point toward Kremlin involvement," said the report by George Barros, an analyst for the Study of War think tank. "The campaign's false information increased distrust of the Ukrainian government, caused protests in at least five different towns and forced the resignation of a Ukrainian governor."

Moscow has long run what information warfare or "active measures" experts refer to as 4D campaigns - for dismiss, distort, distract and dismay. The former U.S. ambassador to Germany, John B. Emerson, in a 2015 speech, warned that the Russian government was becoming more proficient at running 4D campaigns. 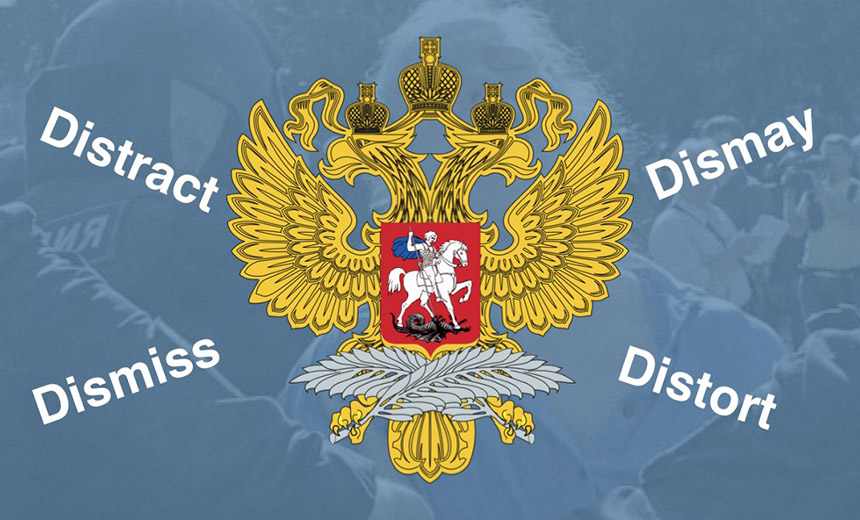 Disinformation experts say that more recently, pro-Kremlin operators have been deploying the skills not just via news media outlets but also across social media channels and via bots and troll farms, in an attempt to interfere in a variety of ways - including disrupt the 2016 U.S. elections - as well as to spread "polarized and anti-vaccine" misinformation (see: Russian Trolls 'Spread Vaccine Misinformation' Online).

The World Health Organization has warned that one risk to the public health response to COVID-19 remains the massive "infodemic," or overabundance of information, now facing individuals as they struggle to find accurate, reliable and trustworthy information about the pandemic.

"It is not only coming from Russian, this is not the only source of the disinformation, but whoever is spreading the disinformation is essentially playing with people's lives," the European Commission's Stano says.

"Russia is not the only culprit though," says IntSights' Wright. In fact, numerous other countries have also been peddling COVID-19 disinformation and misinformation, she warns.

"Many leaders, including President Trump, minimized the COVID-19 problem initially, only to later acknowledge its seriousness," she says. "This type of publicity is confusing for the public and further sows distrust in governments, healthcare systems, and media."

EEAS notes COVID-19 is also the focus of a Chinese language pro-Beijing propaganda campaign that seeks to laud President Xi Jinping's handling of the crisis and present the Chinese Communist Party's response to the pandemic as being "strong and successful." The campaign also claims that the virus didn't originate in China, but rather abroad - most likely in the U.S. Some propaganda has even claimed that "the West instrumentalized the virus in order to harm China and spread anti-Chinese sentiment, for which it owes China and the Chinese people an apology," EEAS's report notes.

A pro-Iran campaign also claims that the U.S. created the virus as a biological weapon, EEAS says. The unit also tracked reports in Lithuania, where there were false claims that a U.S. soldier with COVID-19 had been taken to one of the country's hospitals, and in Slovakia, where officials said there were false reports that Prime Minister Peter Pellegrini had contracted the virus at a February summit in Brussels.

Some social media posts and viral text messages in the U.S., meanwhile, have suggested that the Trump administration is on the verge of ordering a national lockdown or quarantine to better combat the disease. Earlier this month, the White House's National Security Council dismissed such suggestions as being "absolutely false."

Acting Homeland Security Secretary Chad Wolf has also dismissed suggestions that there would be a national quarantine or national travel restrictions. "I would just say, that's absolutely false. It's not true," Wolf told Fox News on Sunday, The Hill reports.

Such rumors likely trace to Moscow, Wolf said. "It is part of a disinformation campaign. What we know, whether it's Russia, or whether it's other cyber actors ... [is] they like to sow discord on any controversial issue. ... So, it doesn't just have to be elections. It can be any issue. And we're seeing that now with the coronavirus."