Hackers in recent days have been hunting for SSL VPNs manufactured by both Fortinet and Pulse Secure that have yet to be updated to fix serious security flaws, security experts warn.

There's been a surge in scanning attempts by attackers to locate and automatically hack these devices, exploiting known flaws that allow them to steal passwords and other sensitive data. With stolen passwords in hand, attackers can potentially gain full, remote access to organizations' networks.

The attacks come despite both vendors having released patches several months ago - Pulse Secure in April, Fortinet in May - via firmware updates that included security fixes. Both vendors warned that all customers should install the updates as quickly as possible, given the severity of the flaws. Many organizations, however, apparently have yet to install the updated software, and thus remain at elevated risk from escalating exploit attempts.

In recent days, reports of attacks against vulnerable Pulse Secure and Fortinet SSL VPNs have been escalating.

"Lots of companies have the basics around patching Windows and Linux down, as they have vulnerability management platforms and agents," Beaumont said. "Those don't extend to FortiOS and Pulse Secure. So they just don't patch as they never see [vulnerabilities]." 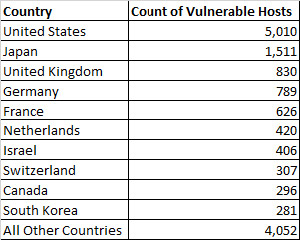 On Saturday, Mursch said that nearly 15,000 unpatched Pulse Secure VPN servers appeared to still be at risk, based on an analysis of scans he conducted using BinaryEdge, which found a total of 41,850 Pulse Secure VPN endpoints, most of which had been patched.

The greatest number of organizations with unpatched Pulse Secure SSL VPNs are located in the U.S. "The list of affected organizations will not be published because this critical vulnerability is easy to exploit using publicly available proof-of-concept code," Mursch said. But he noted that he has shared his findings with US-CERT and federal law enforcement agencies and will share them for free with any country's computer emergency response team.

Reports of mass scanning to identify and exploit vulnerable Fortigate SSL VPNs are also increasing. On Sunday, Beaumont reported seeing "the Fortigate SSL VPN backdoor being used in the wild" via one of his honeypots.

To catch it you need to serve page back via /remote/login* first.

"CVE-2018-13379 is being exploited in the wild on Fortigate SSL VPN firewalls," Beaumont says. "These [devices] exist as a perimeter security control, so it's a bad vulnerability."

Just how widespread are such flaws in SSL VPNs? Researchers Meh Chang (@mehqq_) and Orange Tsai (@orange_8361) at Taipei City, Taiwan-based consultancy Devcore asked that question last August, given the prevalence and reliance on such equipment.

"What if this trusted equipment is insecure? It is an important corporate asset but a blind spot of corporation," they said.

In addition, they noted, among the largest 500 publicly traded U.S. companies, just three SSL VPN vendors commanded 75 percent market share. "The diversity of SSL VPN is narrow. Therefore, once we find a critical vulnerability on the leading SSL VPN, the impact is huge," they said. "There is no way to stop us because SSL VPN must be exposed to the internet."

Based on their count of recent publicly exposed common vulnerabilities and exposures in SSL VPNs, it appeared that Cisco equipment would be the riskiest to use. To test that hypothesis, the researchers began looking at SSL VPNs and found exploitable flaws in both Pulse Secure and Fortinet equipment. The researchers reported flaws to Fortinet on Dec. 11, 2018, and to Pulse Secure on March 22.

In response, Fortinet released a security advisory on May 24 and updates to fix 10 flaws, some of which could be exploited to gain full, remote access to a device and the network it was meant to be protecting. In particular, it warned that one of the flaws, "a path traversal vulnerability in the FortiOS SSL VPN web portal" - CVE-2018-13379 - could be exploited to enable "an unauthenticated attacker to download FortiOS system files through specially crafted HTTP resource requests."

Such FortiOS system files contain sensitive information, including passwords, meaning attackers could quickly give themselves a way to gain full access to an enterprise network.

In its security alert, Fortinet warned all users to update their firmware to FortiOS 5.4.11, 5.6.9, 6.0.5, 6.2.0 or above, to safeguard themselves. On June 4, it also detailed some temporary workarounds that could help protect organizations until they could install the patch.

In a blog post released last month, the Devcore researchers recapped their Black Hat 2019 demonstration from early August, demonstrating how the flaws they'd found in Fortinet devices could be exploited.

"In the login page, we found a special parameter called magic. Once the parameter meets a hardcoded string, we can modify any user's password," the researchers said.

Given the large number of Fortigate SSL VPNs that still seemed to not have been patched, the researchers said that they were not going to publicly disclose the magic string. But they noted that German security consultancy Code White had also identified the underlying flaw, and they said it was certain that malicious attackers would quickly find it too. "Please update your Fortigate ASAP!" they said.

Critical vulns in #FortiOS reversed & exploited by our colleagues @niph_ and @ramoliks - patch your #FortiOS asap and see the #bh2019 talk of @orange_8361 and @mehqq_ for details (tnx guys for the teaser that got us started) pic.twitter.com/TLLEbXKnJ4

Pulse Secure, about four weeks after receiving the Devcore researchers' bug alert in March, on April 24 released updated software and urged customers to upgrade all affected products "as soon as possible." The vendor warned that exploit code had already been released, and that aside from patching, no workaround would protect systems. Subsequently, however, it has detailed workarounds, but only for two of 10 different vulnerabilities that it was patching.

For the 10 flaws that Pulse Secure patched, it credited their collective discovery to Devcore's Tsai and Chang, plus Jake Valletta of FireEye, saying they'd reported the flaws to the vendor on March 22.

This isn't the first time that serious flaws have been found and patched in enterprise-grade networking gear.

In 2016, for example, experts warned that they'd found a vulnerability in FortiGate OS - the firmware that runs its devices - that functioned as an SSH backdoor, not long after researchers had found an authentication bypass flaw in Juniper's ScreenOS firmware. At the time, Juniper warned that its code may have been tampered with. Fortinet, however, said that a code review had proved that the error was inadvertent (see: Fortinet Refutes SSH 'Backdoor' Report).

Next Fraud: Why Payment Card Industry Must 'Get Its Act Together'