Guess the Size of Fed IT Security Workforce

The lack of government-wide definitions for information security occupations means the agencies with the largest IT budgets don't know how many cybersecurity experts they employ.

None of the agencies could precisely enumerate the number of IT security personnel they employed. In fact, estimates within agencies varied widely, based on who was reporting and analyzing employment data. When GAO auditors examined the Defense Department's Federal Information Security Management Act report for 2010, they counted 87,846 employees with significant information security responsibilities. But when they reviewed the Office of Management and Budget's analysis of Defense's FISMA data, it showed 66,000 fulltime equivalent IT security employees. A much lower estimate, 18,955 infosec employees, came from the Office of Personnel Management. Similar variations can be found in data provided by other agencies.

Need for Cybersecurity Occupational Series, or Not

Since there is no federal occupational series that identifies federal cybersecurity positions, many agencies use the occupational series developed by OPM, but they generally reflect information technology - not specific IT security - occupations, such as security administration, program management and intelligence.

That doesn't surprise Melissa Hathaway, who surveyed the government's cybersecurity capabilities when she led President Obama's cyberspace initiative in 2009. "The challenge is that there are a lot of different jobs associated with cybersecurity and none are necessarily binned as cyber when it comes to headcount," Hathaway said. "Jobs range from analyst, system administrator, chief information security officer, operations planner, policy coordinator, etc. They also associate with a wide range of missions: law enforcement, homeland security, critical infrastructure protection, counter-intelligence, information system security, and so on."

Still, OPM officials agreed that there is no way other than creating an occupational series to allow easy identification of cybersecurity employees government-wide, yet it has no plans to create such a job series. OPM officials told GAO that determining a way to track federal cybersecurity personnel will be part of some future efforts to reform federal personnel systems. 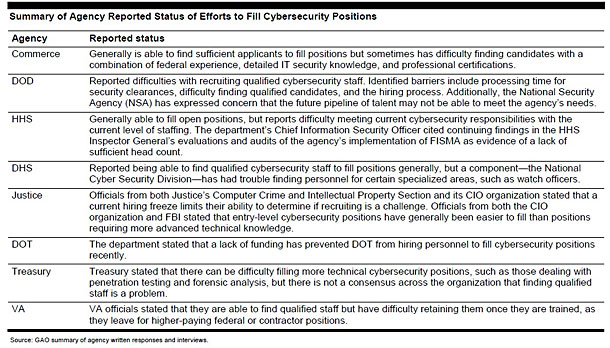 "The initiative lacks plans defining tasks and milestones to achieve its objectives, a clear list of agency activities that are part of the initiative, and a means to measure the progress of each activity," Wilshusen and Melvin wrote.

While the Federal CIO Council, NIST, Office of Personnel Management and Department of Homeland Security have taken steps to define skills, competencies, roles and responsibilities for the federal cybersecurity workforce, the GAO report said, these efforts overlap and are potentially duplicative, although officials from these agencies reported beginning to take steps to coordinate activities. Still, there is no plan to promote use of the outcomes of these efforts by individual agencies.

OMB and DHS have identified several agencies to be service centers for government-wide cybersecurity training, but none of the service centers or DHS evaluates the training for duplicative content, effectiveness or extent of use by federal agencies, GAO said. The Scholarship for Service program, run by the National Science Foundation, is a small though useful source of new talent for the federal government, but the program lacks data on whether its participants remain in the government long-term, the report said.

Previous
ACOs and Security Essentials
Next Best IT Certifications for 2012

Guess the Size of Fed IT Security Workforce