Glaser, a member of HealthcareInfoSecurity.com's editorial board of advisers, will start his new role as head of Siemens' Health Services Business Unit August 16. He'll lead of team of more than 4,500 employees.

At Partners, Glaser directed IT for 10 hospitals, including Massachusetts General Hospital and Brigham & Women's Hospital. He ran a team of 1,300 IT professionals. Earier, he was CIO at Brigham & Women's for seven years. So after 22 years as a CIO, "It was time to try something else," Glaser says.

Siemens gains a well-known hospital IT leader as well as someone very familiar with the government's incentive program for electronic health records. 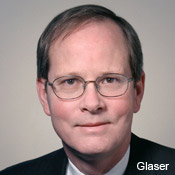 In hiring Glaser, Siemens gains a well-known hospital IT leader as well as someone very familiar with the government's incentive program for electronic health records.

That's because Glaser recently completed 11 months as a part-time adviser to David Blumenthal, M.D., national coordinator for health information technology within the Department of Health and Human Services.

"I have developed an appreciation for the thought process that goes with developing rules and regulations," Glaser says. And that knowledge could come in handy as Siemens attempts to win extra business from organizations scrambling to win federal incentive payments.

Glaser predicts the incentive program could lead to a "flushing out" of a lot of clinical software companies that cannot meet the government's demanding standards for certified records software.

In a recent interview, he stressed the importance of encryption, pointing out that a majority of the major healthcare breaches reported to federal authorities so far have involved lost or stolen mobile devices, rather than major hacking attacks. "It's just like more lives are lost on any particular weekend by drunk driving than by airplane crashes that draw the headlines," he says.

Glaser also reminded his peers that federal regulators are about to ramp up HIPAA privacy and security audits, creating yet another reason to get serious about risk assessments and security plans.

Many know Glaser from his role as founding chair of the College of Health Information Management Executives, the association for CIOs. He also won CHIME's CIO of the Year award. And he served as president of the Healthcare Information and Management Systems Society.

But, more important, he was in the trenches for 22 years as a CIO. And he was on the inside when federal regulators crafted the preliminary rules for the EHR incentive program.

So Siemens scored a coup by landing a true healthcare IT leader.