Howard Schmidt doesn't look like one, but he's a rock star in the cybersecurity universe. As proof: the White House cybersecurity coordinator will headline the biggest IT security show of them all, the RSA Conference in San Francisco this week.

Schmidt will give not one, but two performances Tuesday: The keynote address at midday and an early evening town-hall-style meeting, where he'll field questions from adoring fans and, no doubt, some critics of administration cybersecurity policy. 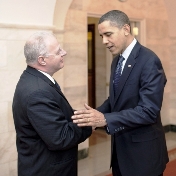 This will be Schmidt's second public appearance since becoming cybersecurity coordinator six weeks ago. He received a warm welcome as the keynoter at the State of the Internet Conference in Washington in late January, answering attendee questions before holding an impromptu press conference. He enjoys working a crowd, and he's good at it, too.

Schmidt's remarks will be followed closely because of what seems to be a worsening milieu for cybersecurity, with virtual attacks on Google, Intel and other businesses continuing to capture headlines and the former Director of National Intelligence Michael McConnell declaring that America would lose a cyber war if one were held now.

The cybersecurity coordinator isn't as pessimistic as McConnell about the state of our cyber readiness, at least based on his recent remarks, but Schmidt recognizes a lot of hard word is needed and cooperation among our governments, the private sector and international allies to assure the security of government systems and the nation's critical IT infrastructure.

RSA gives Schmidt the platform to assert not necessarily his own leadership but that of Obama administration in meeting our cybersecurity challenges. Some disappointed allies of the president, including a few on Capitol Hill, have called on the White House to become more assertive in defining and leading the national cybersecurity agenda.

Schmidt's appearance will be the second straight year that a top Obama White House cybersecurity leader will address RSA with much anticipation. Last year, Melissa Hathaway delivered a keynote address just weeks after she handed Obama her 60-day review of the federal government's cybersecurity practices.

It was Hathaway's first public speech as a top presidential cybersecurity adviser and the buzz surrounding her appearance was intense. But her speech disappointed many attendees because of its vagueness. "Clearly, Melissa was asked by the administration not to provide any details on the specific recommendations provided in the report prior to them being vetted by the administration," Homeland Security CIO Richard Spires, then an independent consultant, said at the time.

Indeed, it would be five weeks later before President Obama would make a major cybersecurity speech in the White House that outlined his cyberspace policy based on the Hathaway-led research initiative.

Hathaway's back at RSA this year, this time as an independent consultant to the likes of Cisco and the Harvard Kennedy School, but no longer as a headliner. She's a participant in a panel - sandwiched between Schmidt's two appearances - entitled Delivering a Unified and Resilient National Cybersecurity Framework, along with her new client, Cisco Chief Security Officer John Stewart.

Hathaway remains popular within cybersecurity circles and has the freedom to be more forthright about her views, something she's has shown since leaving government service in August.

RSA is attracting a slew of current and former government leaders - Homeland Security Secretary Janet Napolitano and her processor Michael Chertoff; FBI Director Robert Mueller; Chris Painter, who served as an acting senior White House cybersecurity adviser till Schmidt's appointment; and former White House cybersecurity adviser Richard Clarke - and when the week is over, perhaps we'll have a better idea of the type of leadership on cybersecurity emanating from Washington.