Security Analyst, Architect Head Top Career Opportunities Upasana Gupta • December 9, 2011     Information security is one of those rare fields - it has more job openings than people to fill them. Dice.com, the largest IT job site, confirms this job growth and indicates a 79 percent increase in the total number of information security jobs posted on the site from September 2009 to September 2011.

Based on a review of job postings, here are the five hottest jobs for information security pros in 2012: 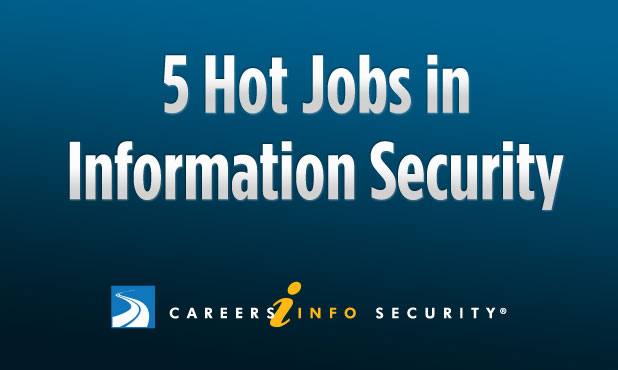 The 5 hot jobs were determined by looking at the largest areas of job growth within IT security posted on Dice.com, an IT job site, from 2010-2011.

Driving the Growth: Move to mobile, wireless and cloud services by organizations. Also, increased cyber awareness as a result of of cyber crimes.

What are the five hottest jobs? Continue to see.

Who's Hiring:
Cloud providers, IT firms, banks and healthcare companies.

Why IT Security Careers Remain Hot

Employers have posted 42 percent more security analyst jobs on Dice in September 2011 than in 2010. This is no surprise, especially when employment among information security analysts soared by 16 percent this year during the second quarter, with the Bureau of Labor reporting no unemployment during the first two quarters of 2011. (see Infosec Joblessness Remains Steady, at 0%).

John Reed, executive director at Robert Half Technology, an IT staffing firm, attributes the high growth to organizations becoming more security aware in light of cyber crimes, and needing hands-on IT security folks to uncover new vulnerabilities in order to keep their environment secure.

"These are individuals on the front lines of security, fighting the fight everyday, and as such are critical for organizations to have," he says.

Forty percent more jobs are posted on Dice this year. The move to mobile, wireless and cloud services by organizations has created a huge demand for this position, says Mano Paul, (ISC)2 software assurance adviser. These services are pushing the need for a "new breed of architects and business- savvy leaders who understand business requirements, and can translate them into functional specifications without compromising on the assurance aspects," he says.

Dice.com defines a security architect as a professional who designs systems, databases, infrastructure and networks to be secure. They provide information security solutions to the architecture of an enterprise ensuring the security of business information at every point.

Thirty-three percent more jobs are posted on Dice in application security this year. The increased focus on customer-facing technologies, use of mobile applications, need for secure software and products within organizations and transitions to electronic health records have led to the demand for these jobs.

"High incidences of application attacks, data breaches and applications that are conduits to the data, combined with surge in tech businesses, is pushing growth for qualified professionals," Paul says.

The Open Web Application Security Project, a not-for-profit organization focused on improving the security of application software, defines application security professionals as those that use software and security methods to protect applications from external threats and vulnerabilities. They are largely involved in building security measures into an application's life cycle including design, development, deployment, upgrade or maintenance.

Employers have posted 27 percent more security engineer jobs on Dice this year. This field is hot because the role is broad and covers areas from penetration testing, vulnerability assessments, programming, designing systems to testing software. "It's not like a painting on the wall that you hang up and it's done. Organizations need constant assessment of their risk and vulnerabilities, and therefore require such breadth of expertise," Reed says.

BLS defines security engineers as those who securely design, develop, test and evaluate computer applications and system software. Although programmers write and support programs in new languages, much of the design, security and development are the responsibility of security engineers. They also focus in developing algorithms, and analyzing and solving programming problems for specific network systems.

Twenty-five percent more jobs are posted on Dice within network security this year. Of the 100 jobs that make Money magazine's and Payscale.com's list, network security was ranked number eight last year as one of the most desirable job positions, carrying an annualized 10-year forecast growth of 27 percent.

"Network security continues to be a pain point for companies," says Alice Hill, managing director of Dice.com. She finds that organizations continue to prioritize investing in these professionals to protect critical infrastructure and keep their technology platforms safe from ongoing cyber threats like malware and hacking. Further, she says that the growing use of sophisticated computer networks, including Internet and intranet sites, and the need for faster, more efficient networking products, are increasing the demand for these professionals.

BLS defines network security as those who design and evaluate network systems, such as local area networks, wide area networks and Internet systems. They perform network modeling, analysis, and planning, that deals with the interfacing of computer and communications equipment. Their primary focus is in protecting the computer systems in the network from unwanted intrusions, misuse, access or modifications.

Meeting Data Security Challenges in the Age of Digital Transformation